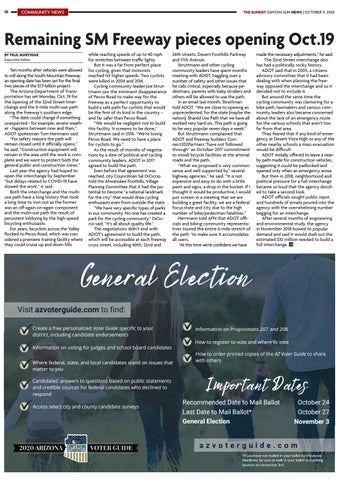 Ten months after vehicles were allowed to roll along the South Mountain Freeway, an opening date has been set for the final two pieces of the $1.7-billion project. The Arizona Department of Transportation has set Monday, Oct. 19 for the opening of the 32nd Street Interchange and the 6-mile multi-use path along the freeway’s southern edge. “The date could change if something unexpected - for example, severe weather - happens between now and then,” ADOT spokesman Tom Herrmann said. “For safety reasons the path will remain closed until it officially opens,” he said. “Construction equipment will remain in the area until the work is complete and we want to protect both the general public and construction crews.” Last year the agency had hoped to open the interchange by September “but delays related to COVID-19 have slowed the work,” it said. Both the interchange and the multiuse path have a long history that took a long time to iron out as the former was an off-again on-again component and the multi-use path the result of persistent lobbying by the high-speed bicycling enthusiasts. For years, bicyclists across the Valley flocked to Pecos Road, which was considered a premiere training facility where they could cruise up and down hills

while reaching speeds of up to 40 mph for stretches between traffic lights. But it was a far from perfect place for cycling, given that motorists reached hit higher speeds. Two cyclists were killed in 2004 and 2014. Cycling community leader Joe Struttmann saw the imminent disappearance of Pecos Road to make way for the freeway as a perfect opportunity to build a safe path for cyclists that would be the first of its kind in the country – and far safer than Pecos Road. “We would be negligent not to build this facility. It screams to be done,’’ Struttmann said in 2016. “We’re losing Pecos Road. We need to have a place for cyclists to go.’’ As the result of months of negotiations by a slew of political and cycling community leaders, ADOT in 2017 agreed to build the path. Even before that agreement was reached, city Councilman Sal DiCiccio told the Ahwatukee Foothills, Village Planning Committee that it had the potential to become “a national landmark for the city” that would draw cycling enthusiasts even from outside the state. “We have very specific types of parks in our community. No one has created a park for the cycling community,’’ DiCiccio said. “It’s all about quality life.’’ The negotiations didn’t end with ADOT’s agreement to build the path, which will be accessible at each freeway cross street, including 40th, 32nd and

24th streets, Desert Foothills Parkway and 17th Avenue. Struttmann and other cycling community leaders have spent months meeting with ADOT, haggling over a number of safety and other issues that he calls critical, especially because pedestrians, parents with baby strollers and others will be allowed to use the path. In an email last month, Struttman told ADOT, “We are close to opening an unprecedented, for the state (maybe the nation), Shared Use Path that we have all worked very hard on...This path is going to be very popular seven days a week.” But Struttmann complained that ADOT and freeway builders Connect202Partners “have not followed through” an October 2017 commitment to install bicycle facilities at the arterial roads and the path. “What we proposed is very common sense and well supported by” several highway agencies,” he said. “It is not expensive and easy to do with a little paint and signs, a drop in the bucket. If I thought it would be productive, I would just scream in a meeting that we are building a great facility, we are a federal focus state and city due to the high number of bike/pedestrian fatalities.” Herrmann told AFN that ADOT officials and biking community representatives toured the entire 6-mile stretch of the path “to make sure it accomodates all users. “At this time we’re confident we have

made the necessary adjustments,” he said. The 32nd Street interchange also has had a politically rocky history. ADOT said that in 2005, a citizens advisory committee that it had been dealing with when planning the freeway opposed the interchange and so it decided not to include it. But around the same time the cycling community was clamoring for a bike path, lawmakers and various community leaders also became concerned about the lack of an emergency route for the various schools that aren’t too far from that area. They feared that if any kind of emergency at Desert Vista High or any of the other nearby schools a mass evacuation would be difficult. ADOT initially offered to leave a nearby path made for construction vehicles, suggesting it could be padlocked and opened only when an emergency arose. But then in 2018, neighborhood and political pressure for a full interchange became so loud that the agency decided to take a second look. ADOT officials sought public input, and hundreds of emails poured into the agency with the overwhelming number begging for an interchange. After several months of engineering and environmental study, the agency in November 2018 bowed to popular demand and said it would shell out the estimated $10 million needed to build a full interchange.

General Election Visit azvoterguide.com to find: Create a free personalized Voter Guide specific to your district, including candidate endorsements Information on voting for judges and school board candidates Where federal, state, and local candidates stand on issues that matter to you Candidates’ answers to questions based on public statements and credible sources for federal candidates who declined to respond Access select city and county candidate surveys

azvoterguide.com *If you have not mailed in your ballot by the above deadlines, be sure to walk in your ballot to a polling location on November 3rd.